It’s amazing how a couple hundred yards off the pavement places you in the same terrain where Wyatt Earp lived!

Both novice and experts were mixed together in comfort as our guide and counselor Jeff Basford of Paha Que Wilderness organized and led a treat in the ultra-dry wilderness. We were surrounded by lava rock formations, gas vents, dozens of cacti, gravel like surfaces of dark volcanic pebbles and rugged volcanic flows.

The history of this area is rich and steeped in the Old West. From the mid 1800’s, hundreds of mines were claimed and worked by individuals and consortiums with rudimentary methods being employed next door to highly-engineered systems. Of the more fascinating accounts was the influx of the French prospectors. The cabins they built can still be seen and visited (rock structures with double wall base). These miners utilized the placer mining techniques and their tailings can be easily identified. Typically, there was a dump area within several feet consisting of old meat cans, soup and food tins intertwined with wagon and equipment skeletons. 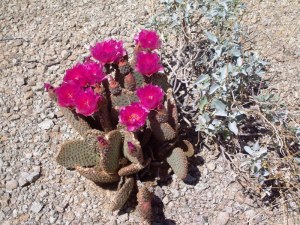 The desert is lovely this time of year. Many cactus are blooming and the bees are busy. Although in my mind I expected absolute dryness, it was off set by the numerous Palo Verde trees with it’s vivid light-green bark. The Ocotillo cactus featured wonderful red blossoms plus the royal color of Barrel and Prickly Pear cactus flowers. Apparently, this year with the increased rains, we caught the bloom even at the end of March.

This particular trip was unseasonably warm …. around 105 degrees during the day and 90’s at night. We were very glad for the powered roof vent in our Little Guy Rough Rider model… when an inversion occurred in the middle of the night rendering our exhaust mode useless, I simply reversed the fan direction and wah-lah, we enjoyed a comfortable desert night on our queen-size bed.

What a great way to camp with these Teardrop Trailers. They have just enough storage capacity to make the campsite perfect for a fresh-air outing with amenities. We noticed the various methods employed by our neighbors and it really boils down to personal needs and choices. We saw barbeques next to Dutch Ovens and discussions of utilizing Sun Ovens with the unlimited power supply of the sun. We witnessed solar power panels recharging battery systems and practical Teardrop designed side rooms attached to off-set the heat and provide a lee-side breezeway (built by Paha Que our organizer). A couple Teardrops even employed Air Conditioners with a small generator purring nearby and solar shower cabanas (no need for towels in the super dry air). 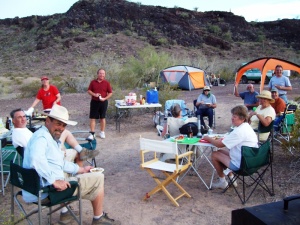 This event will hopefully launch into an annual outing with the possibility of a second event into the backcountry with 4×4 vehicles only (and high clearance campers). I anticipate quite a number of participants joining us as there was plenty of area for many more campers.

If you have a Teardrop or Aliner and want to join in, please send your email address to us and we’ll include you in subsequent notices of our campouts. So far, we still want to catch Death Valley in the late fall or early spring, a mountain region lake in Arizona waiting for us on an Indian Reservation and a winery near Julian which would be perfect on a moonless night.

Our sincere thanks go to Jeff Basford and Mike Greaves of Paha Que Wilderness Camping Systems, our organizer, for designing a worthy trip with great historical and geographical account of the area. We also want to thank our participants for becoming good friends in a matter of a few days! There’s nothing like camping buddies.

Most of all we want to thank Camping Life Magazine for joining us with the trip. We should see a great article by fall with the possibility of a cover theme on Teardropping in the remote desert. We highly recommend subscribing to this publication as they endeavor to cover the type of camping near and dear to us all.

See you next trip!

It was sometime during the summer of 1986 that the idea of exploring old west ghost towns first entered my mind.  I was visiting the store of a friend who sold old west and other historical memorabilia.  It was like a museum with everything for sale, although I never could afford to buy the kind of things he sold in those days.

As we were talking about our common interests in history and the outdoors, he mentioned that occasionally he would take a trip over to Arizona or Nevada to explore and photograph ghost towns.  I was instantly intrigued, it had never really occurred to me that there may still be old, abandoned towns that hark back to the pioneer days.  How fascinating, I thought.  He showed me a photo album full of images of various abandoned towns and I knew I was going ghost town hunting.

Jump forward to 1990.  After a few years of locating, exploring and camping in some of the more accessible ghost towns, a friend and I are starting to search a little deeper into the backcountry for the more hidden, and less vandalized sites.  There really are some amazing sites out there if you are willing to push your skills, and your vehicle beyond your comfort zone.  I’ve repaired many flat tires, and hiked out for assistance on more than one occasion.  For me that is half the fun.  I enjoy the challenge and the risk.  As with most things, being prepared is the key.

While passing through the remote mountain town of Crown King, AZ., nestled atop the Bradshaw Mountains west of the Verde River, we stopped to talk with a Forest Ranger who was parked next to the General Store.  He looked like a veteran, someone who might know this range and some of its history.  We talked about mining, railroads, ghost towns and history.  He had been a ranger in the Crown King district for over 40 years.  I think he could tell we were genuinely interested in the history of these sites, and not just artifact collectors or worse, vandals.

After awhile he just kinda shook his head and said “sorry fellas, but I think you’re 25 years too late to find what you’re looking for.”  He then proceeded to tell us a story about how in 1976 they caught two vandals using their truck winch to pull down the top story of the old hotel in the ghost town of Oro Belle, just to see how strong their winch was.  At that time there were no laws against such actions, and so there was nothing they could do.

So what time and weather hadn’t destroyed. people had.  But still I thought, there had to be something left to show what had happened in these pioneer boom towns.  So we persisted in looking anyhow, and oftentimes were rewarded with more than we expected.

Most of whats left are the scars on the land from the mining and railroads that brought these towns into existence in the first place.  Usually some “jackass” prospector (miners who carried their gear on a donkey and walked the hills in search of gold) would locate a placer deposit or a vein of gold, silver, lead, copper or a combination thereof.  If the claim proved valuable, it didn’t talk long before the rush was on.  Soon the hills were crawling with prospectors.  Next came the promoters, hopefully the investors, and before anyone knew it they had a booming town growing up around the mines.  When the mine deliveries became large enough, some enterprising railroad promoter would build a line to the mines or mill, and then the boom was really on.

But as often was the case, as soon as the veins pinched out, or the mines flooded, or the value of gold or silver dropped, the mines shut down, and the town slowly died.  Oftentimes in the desert, where milled wood was scarce, buildings would be dismantled, and re-built in the next boom town.  Once the buildings were gone, all that was left were the glory holes, railroad grades, and eroding adobe buildings and foundations.  But there is more.  Find the old trash dumps, and you can find wonderful old lead-glass bottles that have turned aqua or blue over the years.  Broken tools, dishes, even old boots.  All garbage to be sure, but an interesting glimpse at the life and times of that area.   Find the old cemetery – every old town had one, oftentimes referred to Boot Hill – and you find a very human connection to the struggles of life on the frontier.

When you see the grave of a little girl who only lived for 1 month, you realize how difficult life really was back then, in that very spot.

Nowadays there isn’t much left to see of the really old pioneer towns.  But they are still there, or at least the scars still are.  And when you do stumble across some reminder of the old days, the pioneer days, and if you can imagine in your minds-eye the events that may have occurred there, you can, for a moment, leave the modern world behind and feel the silence telling a story of a time gone by.

How to replace a broken fiberglass pole

Add a room to your T@B trailer